We just love photo booths, can't you tell? This next photo is part of our Daily Photo Booth series and comes from Reddit. The user who submitted this photo said that they won a "best photo" contest and we'd agree, it's pretty funny. And hey, that's a great idea for photo booths at a party - offer a prize for the BEST photo strip of the night.

Today's Daily Photo Booth photo comes from Reddit. One of the best parts of weddings, parties, etc. are the free drinks and awesome food. In this case, the person who submitted this photo had fun with a cold beer in the photo booth at their cousin's bat mitzvah. 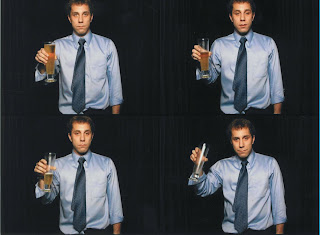 The photo booth industry is a lot of fun and for those who own or operate photo booth rental companies, a funner job could not exist. That being said, and just like any business, you've got to protect your reputation. If you don't, you could be missing out on a lot of customers, or worse, you could be driving customers away.

Here's an example of a photo booth experience gone wrong:

We paid several months in advance for a photo booth rental in southern CA. Fast forward to day of wedding, and photo booth was a complete no-show. Thankfully, we had a secondary "guest book" item planned, and our photographer was AMAZING and everywhere.

Not only did these guys no-show, they failed to return any calls or emails until almost a week later...at which point the owner claims he was not responsible for any of the contractors he uses. Let me get this straight--I pay you, but you have no obligation to deliver services paid for? I think not...

We ended up disputing the charge with our credit card company, as he went from having "already submitted your refund" to "will submit your refund" to "You need to learn that there are things in life that will disappoint you and I am not your punching bag".

He's now disputing the reviews I put up explaining what happened--but clearly didn't think about the fact that he put a lot of condescending, childish behavior into email.

I don't really know where I'm going with it at this point except just trying to vent...I seriously cannot believe the experience we've had!


Ouch! We feel your pain. It hurts us when we see business owners do this in our industry because it brings down the level of trust that should be expected when hiring a photo booth company.

It goes without saying that this type of action is unacceptable, and it's an example of how one company has disregarded their reputation and surely resulted in some bad reviews (which can deter people) and some unrestrained word of mouth, which can not only deter future business, but can damage your brand/company as a whole.

All things considered, look for a photo booth company with reviews and samples of their product so you can really judge what type of experience you'll get. And for those photo booth owners out there, consider your reputation, it's extremely important.

We humans use photo booths all the time. Whether it's at a wedding, party, corporate event or other snazzy get together, we love snapping photo booth photos of ourselves and friends wearing funny hats, boas, and other props. But what about our animal friends? What are they to do?

Well, the era of animal photo booths is upon us, starting with birds. No joke. 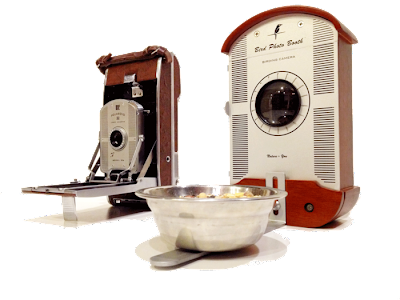 Check out the kickstarter campaign for this bad boy and get your own for around $150.
Posted by K&R at 10:05 AM No comments:

Next up in our Daily Photo Booth series is an oldie but goodie. Andy Warhol wasn't just an art and fashion icon, he also spent a little bit of time in a photo booth. Here are some picture from that magical day in which the King of Pop Art stepped in front of the flash.